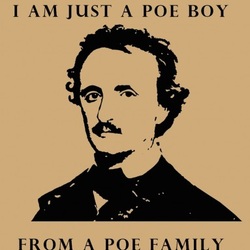 Edgar Poe was born in Boston on January 19, 1809. That makes him Capricorn, on the cusp of Aquarius. His parents were David and Elizabeth Poe. David was born in Baltimore on July 18, 1784. Elizabeth Arnold came to the U.S. from England in 1796 and married David Poe after her first husband died in 1805. They had three children, Henry, Edgar, and Rosalie.

Elizabeth Poe died in 1811, when Edgar was 2 years old. She had separated from her husband and had taken her three kids with her. Henry went to live with his grandparents while Edgar was adopted by Mr. and Mrs. John Allan and Rosalie was taken in by another family. John Allan was a successful merchant, so Edgar grew up in good surroundings and went to good schools.

When Poe was 6, he went to school in England for 5 years. He learned Latin and French, as well as math and history. He later returned to school in America and continued his studies. Edgar Allan went to the University of Virginia in 1826. He was 17. Even though John Allan had plenty of money, he only gave Edgar about a third of what he needed. Although Edgar had done well in Latin and French, he started to drink heavily and quickly became in debt. He had to quit school less than a year later.

Poe in the Army

Edgar Allan had no money, no job skills, and had been shunned by John Allan. Edgar went to Boston and joined the U.S. Army in 1827. He was 18. He did reasonably well in the Army and attained the rank of sergeant major. In 1829, Mrs. Allan died and John Allan tried to be friendly towards Edgar and signed Edgar's application to West Point.

While waiting to enter West Point, Edgar lived with his grandmother and his aunt, Mrs. Clemm. Also living there was his brother, Henry, and young cousin, Virginia. In 1830, Edgar Allan entered West Point as a cadet. He didn't stay long because John Allan refused to send him any money. It is thought that Edgar purposely broke the rules and ignored his duties so he would be dismissed.

In 1831, Edgar Allan Poe went to New York City where he had some of his poetry published. He submitted stories to a number of magazines and they were all rejected. Poe had no friends, no job, and was in financial trouble. He sent a letter to John Allan begging for help but none came. John Allan died in 1834 and did not mention Edgar in his will.

In 1835, Edgar finally got a job as an editor of a newspaper because of a contest he won with his story, "The Manuscript Found in a Bottle". Edgar missed Mrs. Clemm and Virginia and brought them to Richmond to live with him. In 1836, Edgar married his cousin, Virginia. He was 27 and she was 13. Many sources say Virginia was 14, but this is incorrect. Virginia Clemm was born on August 22, 1822. They were married before her 14th birthday, in May of 1836. In case you didn't figure it out already, Virginia was Virgo.

As the editor for the Southern Literary Messenger, Poe successfully managed the paper and increased its circulation from 500 to 3500 copies. Despite this, Poe left the paper in early 1836, complaining of the poor salary. In 1837, Edgar went to New York. He wrote "The Narrative of Arthur Gordon Pym" but he could not find any financial success. He moved to Philadelphia in 1838 where he wrote "Ligeia" and "The Haunted Palace". His first volume of short stories, "Tales of the Grotesque and Arabesque" was published in 1839. Poe received the copyright and 20 copies of the book, but no money.

Sometime in 1840, Edgar Poe joined George R. Graham as an editor for Graham's Magazine. During the two years that Poe worked for Graham's, he published his first detective story, "The Murders in the Rue Morgue" and challenged readers to send in cryptograms, which he always solved. During the time Poe was editor, the circulation of the magazine rose from 5000 to 35,000 copies. Poe left Graham's in 1842 because he wanted to start his own magazine.

Poe found himself without a regular job once again. He tried to start a magazine called The Stylus and failed. In 1843, he published some booklets containing a few of his short stories but they didn't sell well enough. He won a hundred dollars for his story, "The Gold Bug" and sold a few other stories to magazines but he barely had enough money to support his family. Often, Mrs. Clemm had to contribute financially. In 1844, Poe moved back to New York. Even though "The Gold Bug" had a circulation of around 300,000 copies, he could barely make a living.

In 1845, Edgar Poe became an editor at The Broadway Journal. A year later, the Journal ran out of money and Poe was out of a job again. He and his family moved to a small cottage near what is now East 192nd Street. Virginia's health was fading away and Edgar was deeply distressed by it. Virginia died in 1847, 10 days after Edgar's birthday. After losing his wife, Poe collapsed from stress but gradually returned to health later that year.

In June of 1849, Poe left New York and went to Philadelphia, where he visited his friend John Sartain. Poe left Philadelphia in July and came to Richmond. He stayed at the Swan Tavern Hotel but joined "The Sons of Temperance" in an effort to stop drinking. He renewed a boyhood romance with Sarah Royster Shelton and planned to marry her in October.

On September 27, Poe left Richmond for New York. He went to Philadelphia and stayed with a friend named James P. Moss. On September 30, he meant to go to New York but supposedly took the wrong train to Baltimore. On October 3, Poe was found at Gunner's Hall, a public house at 44 East Lombard Street, and was taken to the hospital. He lapsed in and out of consciousness but was never able to explain exactly what happened to him. Edgar Allan Poe died in the hospital on Sunday, October 7, 1849.

The mystery surrounding Poe's death has led to many myths and urban legends. The reality is that no one knows for sure what happened during the last few days of his life. Did Poe die from alcoholism? Was he mugged? Did he have rabies? A more detailed exploration of Poe's death can be found here.